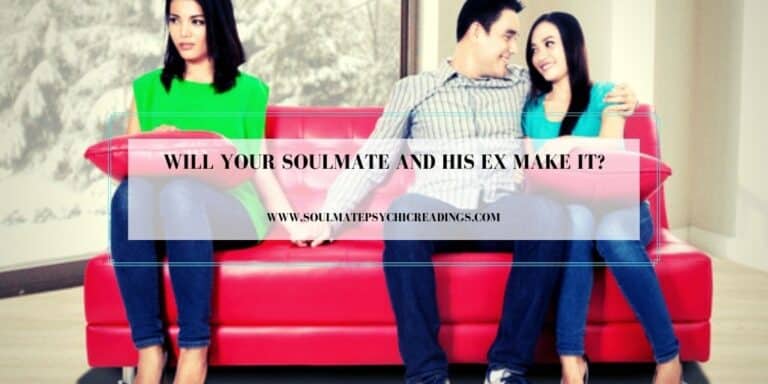 Will your soulmate and his ex make it? For some unknown reason your soulmate decided to let go of your great relationship and try to make it with his ex.

THE EX IS REALLY POWERLESS

You remember his ex, right? The one who treats them like crap? The ex who wouldn’t be intimate with them or that intimacy wasn’t good? The ex they couldn’t be or didn’t want to be affectionate with? The one they’ve broken up with numerous times? Who they’ve cheated on? The ex that they pretty much have nothing good to say about? Yes, that ex.

You wonder if your soulmate and his ex will make it work this time? Seriously? The only thing they had in the past was a crazy, toxic relationship. What would make you or them think they will somehow make it this time? Why would you not think history will repeat itself and that the same problems they have been unable to deal with in the past they won’t be able to deal with this time either? That’s what you both should be thinking.

It defies logic and common sense to think something so badly broken could be easily fixed. It’s ridiculous to that people with such horrible relationship skills and patterns will turn their dysfunction into something healthy and happy. So, the prognosis it not too positive. Change is really hard, and you have to work at it consistently to make it stick.

RUNNING FROM YOU TO THE EX

Of course when they first get back together it will be all sunshine and roses. Big deal. But will that short period of time help them to make it long-term? Nope, not at all. When the same issues come up yet again, and of course they will, they will ruin everything again.

The reason many soulmates return to their ex is because they’re actually running away from you. The familiarity of their crazy ex and their crazy relationship is what they are used to. This new relationship, where the connection is off the charts, is scarier than dealing with their crappy old relationship.

Many soulmates will run back to their ex to try to make that work rather than face their fears and surrender to their soulmate. There is less risk of getting hurt and devastated by someone who can’t hurt you than there is by someone who you truly care about. It’s no surprise to discover a soulmate ran back to an ex to try to make it work again. It happens more than you think.

Even if a soulmate doesn’t try to make it work with an ex they may still just run away to be by themselves. What is most important is how you let this affect you and your relationship. Don’t give their ex more power than they have. They’re not the one your soulmate really cares for. Don’t make the ex out to be the enemy here. They didn’t manipulate your soulmate. Your soulmate is a grown, responsible adult (or should be) who’s accountable for their choices and actions.

Your soulmate’s ex may cause interference in our relationship, but they made the choice, not the ex. Your soulmate is not a puppet, they did what they wanted to do, regardless of the reasons they told you. When it doesn’t work out between them hold them accountable for the hurt and mistrust they caused you. Don’t just welcome them back with open arms, don’t just give them a piece of your mind. Make them work for it.