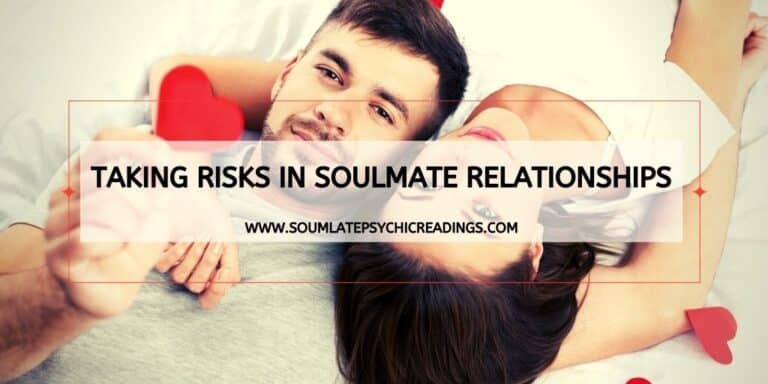 Taking risks in soulmate relationships is not always wise, but all relationships have an element of risk. Some soulmates who are in union may be ready, willing and able to take any risk. But the other may be extremely hesitant. Why is that? Why are both members of a soulmate couple not always ready to take the risk to pursue a relationship with their soulmate?

TAKING RISKS ON THE UNKNOWN

Well, for one thing, many people do not believe in soulmates. They have no idea what they are. And even if they’ve heard of them, they don’t believe they have a soulmate. So when they encounter a soulmate, they tend to freak out big time. They have zero preparation for this experience, and don’t know how to handle it. And this is why they handle it so badly.

Nothing makes sense to them, especially feeling so much for someone so soon. They feel completely out of control. And they don’t like it one bit. So, instead of going with the flow and enjoying the connection and it’s intensity, they run from it. They feel the risk is too great.
And they’re not comfortable with feelings at this level. They may be ready to take the risk down the road. But for right now, they want out.

SLOWING DOWN KEEPS IT SAFE

Getting hurt in previous relationships often compels some people to want to take every new relationship slow. This makes sense and is a wise decision. However, with soulmate relationships the trajectory is fast. Really fast. Feelings, and the intensity of those feelings, come quickly and strongly. And right away. It’s very hard to stop a whirlwind when you’re in it. Sure, you can slow it down to a certain degree, but not entirely.

Many soulmates who are taking risks will slam on the brakes. You see this happen quite often with soulmates. Things are going
wonderfully, both seem to be on the same page then poof. And it stops just as quickly as it starts. One, or both soulmates, decide the pain they could feel from this union would be worse than any prior relationship. So, rather than waiting for a shoe to drop they pull the shoe off themselves. And then fling it as far away as they can!

SO THEY END IT BEFORE THEY GET HURT

People who don’t want to risk the pain of losing their soulmate choose to lose them earlier, rather than later. This doesn’t make sense to most people, but so many do this to their spiritual partner. They ghost their soulmate, blocking them from calls, texts, social media and seeing one another face to face. And they may not even tell their soulmate they are ending the relationship!

To these folks, this is their reaction to their fear of getting hurt in the worst way possible. And since they wind up hurting anyway, for doing something so ridiculous, they wind up returning to their soulmate later on. It’s hard for someone who is ready to jump into their soulmate relationship with two feet to understand. The truth is, not everyone is fearless when it comes to love and being in spiritual union with someone.

Even those who welcome a soulmate union are surprised and a bit spooked by how intense it all is on so many levels. Keep in mind though, that in many cases, taking that leap of faith and accepting the risks involved is one of the soulmate lessons they may need to learn. And not everyone is a fast learner.