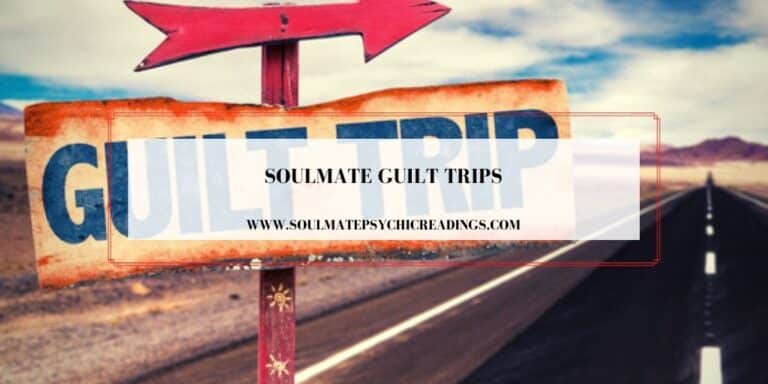 All relationships can be manipulated with guilt trips, even soulmate relationships. It’s one thing to feel guilty for doing something wrong to your soulmate. It makes sense to feel remorse if you have hurt your soulmate. Guilt trips are another matter all together. Soulmates can use guilt trips in order to get what they want. They may want you to feel overly guilty for little things they can use against you. When a soulmate uses guilt trips to get their way, or to get attention, rarely will they stop on their own. Once you have shown them guilt trips work in their favor, they will use them against you as often as they like.

We all have the desire to express our feelings of hurt when a soulmate makes us feel bad. We communicate to resolve the issues and move forward. But that’s not the intention of a soulmate guilt trip. They pretend to be more hurt than they are. And they want you to feel worse than you should.

In doing so, they can get the attention they seek and the reward they want. Most people don’t realize if a person is taken on too many guilt trips, resentment will build. They recognize the guilt trips and the manipulation. They tire of feeling guilty for every little thing and emotionally distance themselves.

This will cause the deterioration of a soulmate relationship. We all know right from wrong and we all screw up. But the constant badgering that one soulmate does to the other that pushes the relationship over the edge. No one likes manipulation. And no one likes the manipulator after a while either.

Countless times we see examples of how this is used to control or manipulate soulmates. A common way soulmates use guilt trips is by using the connection itself. For example: Let’s say Bob screws up royally. He is to attend a party with Brenda, but he is a no-show. Then he’s silent for a week, never calling or texting to explain his failure to appear. By the second week, Brenda is really pissed off.

Bob never calls her back and seems to vanish from the face of the earth. So she make one last call and leaves a message saying she won’t tolerate this behavior. And the relationship is over. So Bob uses a guilt trip by texting back “But you’re the one who said we are soulmates. I guess you’re lying to me. If I am really your soulmate you won’t up with me”.

It’s shocking to know how much this type of guilt trip happens between soulmates. They use the soul connection as a way to constantly avoid consequences. They also use it to keep the other soulmate from leaving them. So how do you avoid being taken on a soulmate guilt trip?

Well first of all, if you are the only one really feeling guilty all the time then chances are you are being taken on a guilt trip. You know right from wrong. And if it really is a minor mistake or misunderstanding, there’s an easy resolution. Especially if your soulmate is the one that screws up time and again.

You should never feel guilty for refusing to take anyone’s mistreatment of you. You should never feel bad about expressing your pain or hurt, as long as it is done properly. But neither one of you has the right to beat it to death over and over and bring it up year after year after year. Guilt trips are like poison to soulmate relationships. So don’t fall for them and don’t use them with your soulmate.