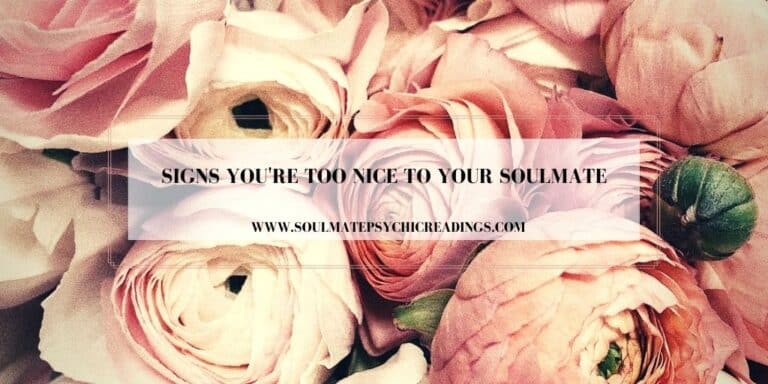 1. Using a mystical force to excuse their behavior

You don’t take responsibility for what either of you do. They get away with bad behavior because you make excuses for them. You insist your connection is so strong that you’re unable to control yourself. So you just put up with it or let them off easy. This is a total cop-out. And will get neither of you anywhere, except head first into a dysfunctional soulmate relationship.

2. They call all the shots in the relationship.

They can disappear for however long, leaving you wondering what the hell is going on. When they come back, you think telling them how much it hurt is a worthy punishment. That’s being way too nice. And all that’s going to get you is repeats of the same behavior, taken to worse levels over time. The punishment should fit the crime. You’re giving your soulmate probation all the time and they will not take you seriously.

If your soulmate wants to be the center of your relationship, and you allow it, you’re being too nice to them. Let’s say your soulmate wants you to wait for them to end their marriage because of the kids. They want you to understand where they’re coming from and sympathize with their situation. They forget how this makes you feel and how it screws up your life.

Sure, they may say they understand how you feel. But if they do, why are you the only one being understanding and making the sacrifices? We could see how someone going to jail would ask you to wait 10 years for them. But asking you to wait 10 years so they can carry on an affair with you? Because they think their children can’t handle a divorce?

The kids aren’t going to become serial killers or have a social stigma because their parents get a divorce. How come they don’t worry about their kids finding out they had a long-term affair cheating on their mother? You are being too nice by hanging in there too long, waiting for your soulmate to be single.

4. They aren’t there for you when you need them.

If you’re there for them whenever they need you, but they are nowhere to be found when you need them, you’re being too nice to your soulmate. It’s time you show them what it’s like to be you. Talking isn’t going to do it. Just take a page out of their playbook. And stop being there offering support and whatever else they need. They will notice what you take away. So make them take notice. Make them earn that back by them giving back to you.

5. You’re the peacemaker, all the time.

If you’re the one who’s the bigger person and always fixes things, you’re being to nice. It’s not your job, especially if they are the one causing the problems. Stop treating them as if they have a missing gene where they can’t apologize. Everyone on earth can learn to apologize. Knock that excuse off already.

Stop being so impatient for an apology because you’re afraid you’ll never get one. That’s an irrational fear for the most part, and an entirely lame excuse. They’re not a child, they are an adult.  And you don’t have to do everything for them. Let them learn how to have a better relationship with you, instead of allowing toxic, childish behavior to continue.

In soulmate relationships, there are certain rules that should be followed for a positive soulmate experience. Being too nice, allowing yourself to become a doormat, is not one of them.

4 thoughts on “Signs You’re Too Nice to Your Soulmate”