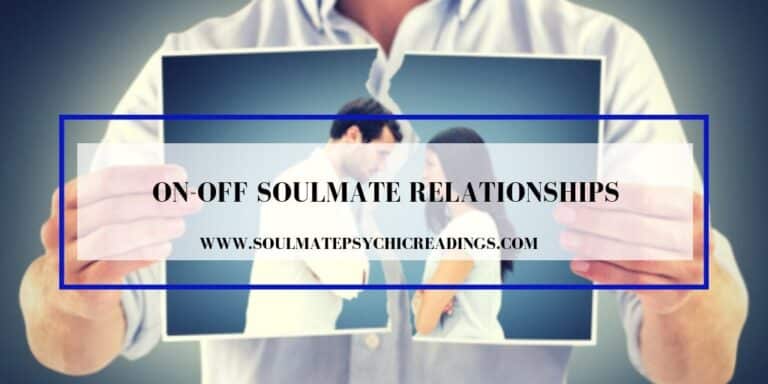 THE PULL AND PUSH OF SOULMATES

Soulmates give each other more chances to get the relationship moving forward than they would anyone else. The unique connection causes them to believe they can’t get closure unless they try everything to get the relationship on track. Another reason for on-off soulmate relationships is because one or both, is a runner. Some soulmate runners only run once. But for others it’s like a swinging door. They run out of fear or because they are in denial about the connection.

While couples are apart, many come to terms with the connection and return because they are now ready to give the relationship their all. The runners, who run over and over, stay away only as long as they think they can get away with it. They don’t want their soulmate to move on. And runners keep coming back to make sure their soulmate doesn’t get the chance to do so. The more they run, the longer they will stay away the next time.

SOMEONE ELSE IS INVOLVED

They do it to avoid doing what they should be doing, which is ending the relationship. And their soulmate is enabling them. These are also hard to fix with no quick fix either. If you’ve let your soulmate pull this stunt one too many times, don’t expect it to change by itself. Your soul mate will keep doing this on-off nonsense for as long as you will allow it.