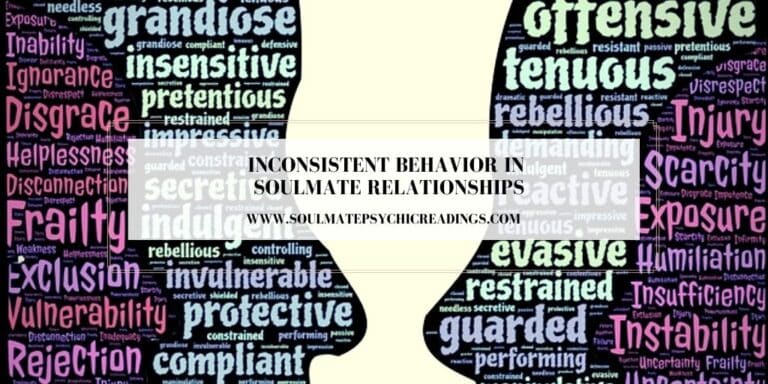 YOUR BEST FRIEND OR WORST ENEMY?

There are many ways soulmate behavior can be inconsistent. It is hard to deal with someone when they’re your best friend but your worst enemy. When a soulmate’s behavior is inconsistent soulmate connections are both a blessing and a curse.

Many soulmates have a hard time understanding the soulmate connection. And what comes with it. At first they fully accept the overwhelming emotions and behave accordingly. They just go with the flow with what they feel. Your soulmate enjoys the fact they feel so comfortable so quickly. They feel at ease to open up and reveal their vulnerabilities.

At a certain point they have an inner struggle. And it’s at that point they behave in inconsistent ways. This can be very troubling to the other soulmate. It feels as though their soulmate has been kidnapped by aliens. And they don’t know how to handle it.

DON’T GIVE IN TO FEAR

The one thing you should not do is succumb to that fear. Your soulmate is not honoring your connection by behaving in an inconsistent way. If you start acting like them, and not having faith in your connection as well, you will both feed off one another. And nothing good will come of that. You have to stay strong and create and enforce boundaries.

If you have to remove yourself from the relationship for a while because they’re behaving so erratic, then please do so. Don’t stick around to allow more damage and obstacles to be created. It only makes things harder to get back to what they were. And the longer you let it continue, the longer it will take to going back to the consistent relationship you want.