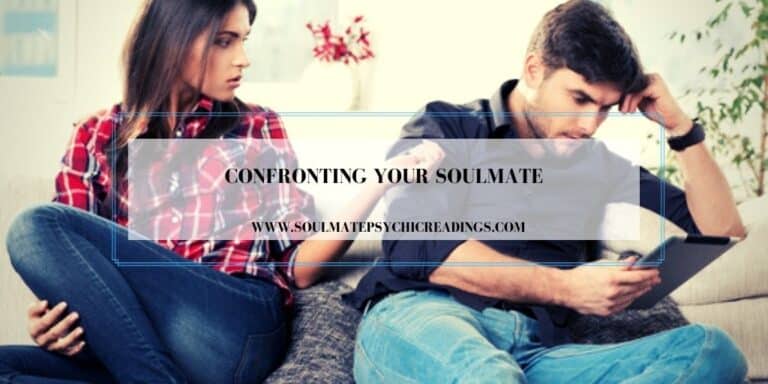 Confronting your soulmate can have a good or bad outcome. A deciding factor will be the timing of the confrontation. For instance, if your soulmate is running from our connection, you may feel the need to confront them. Perhaps they’ve blocked you from their phone and social media. It’s exceptionally frustrating when your soulmate is a running. And they may even be ghosting you.

YOU WON’T GET THEM TO CHANGE THEIR MIND

You want to plead your case, help them through it and change their mind. You’re also very upset and/or very hurt as well. So you set out to confront them, because you are tired of their nonsense. And you feel there are things you need to say and that they need to hear. This all sounds good in theory. But chances are so slim you will have a receptive audience or receive a warm welcome.

They are doing everything in their power to avoid you. And they won’t appreciate you demanding an audience with them. They obviously haven’t worked out their issues. So confronting them will usually result in bad behavior and negative comments on their part. This normally leads to bigger issues for the soulmate couple, even soulmate rejection. And who the hell needs that? No one.

WAIT UNTIL THEY’RE READY TO TALK

If your soulmate is a runner it’s not wise to chase after them and confront them. This is a lesson they have to learn by themselves. And unfortunately you have to give them the space to do that, or risk prolonging them learning their lesson.

Wait until your soulmate wants to speak or see you again. All the things you wanted say by confronting them would have gone in one ear and out the other. They wouldn’t hear you anyway. But now they’re ready, willing and able to at least hear you out. Now you have the chance of them being open and honest instead of defensive.

There’s also a good chance they will learn something while you’re apart. And they will honestly explain what was on their mind at then. While they were in runner mode, they would have lied to you anyway. Now there’s a higher probability to have a real discussion, and be heard, to begin the healing process. If you confront your soulmate when they cut you off, you’d have just been hurt again.

Keep in mind that confronting your soulmate is not enough. You have to show your soulmate through your actions that you have learned your lessons as well. Creating and enforcing new boundaries is a good action to take now. You have to show them their actions not only brought about change in them but created changes in you as well. They need to see, and not only hear, that you’re not going to put up with their behavior or tolerate them running.

You may feel you simply must confront your soulmate now. But we advise you to wait until the timing is right to do so.