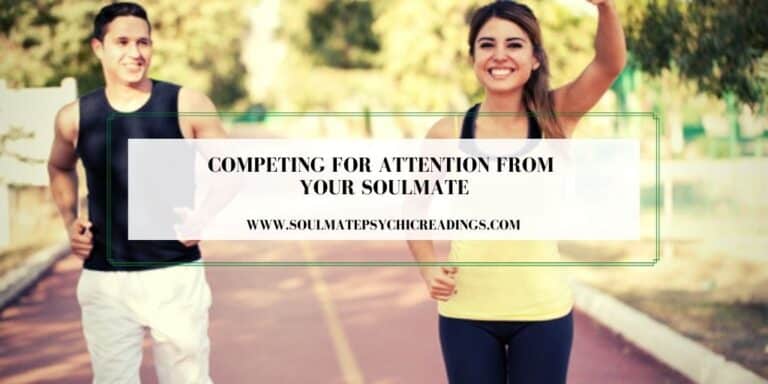 SOULMATES DON’T KNOW HOW TO ACT

Due to intensity of the soulmate connection, many people think they bend the rules a bit. Breaking the rules can actually cause the relationship to fall apart. Because soulmates have a unique, eternal bond, many believe this connection can never be broken. They believe either consciously, or subconsciously, a soulmate will be extra understanding. And be there waiting for them regardless of the amount of time and energy they throw their way.

Soulmates often prove their love in the wrong ways. So it’s easy to see how they think they can do anything and get away with it. Very often they put up with the wrong behaviors. And they can be taken for granted and mistreated in many other ways. Perhaps the reason you are competing for attention is because they know you won’t leave. They’re not afraid because there are no consequences to the lack of attention they give you. So they figure why not do it?

When your soulmate has an attitude like this, there is no telling what kind of shenanigans they will pull on you and your relationship. Your soulmate shouldn’t put you in a place where you are competing for attention. You shouldn’t have to compete with their family, friends, hobbies, work or even a romantic rival. And you should never allow yourself to be put in that situation either.

You may be terrified to lose them and act on that fear. That fear causes your relationship to deteriorate. You reward their bad behavior by standing by them. You’re afraid to punish them. And therefore enable them to continue with the lack of time they spend with you. They are immune to your feelings, because your feelings for them come first, with both of you.

If you revolve your world around them, they are the center of the universe. You are no longer equals. You both took a spiritual connection and made it a dysfunctional one. The universe won’t save your relationship, because they didn’t trash it. Both of you created this mess and it’s up to you both to fix it. You can’t repair your soulmate relationship by competing for affection, attention or anything else.

In order for your soulmate to honor your connection, you must honor it as well. You need to hold them, as well as yourself, to a higher standard. And not a lower one. If they want to lower their standards, don’t go down there with them. It will be even harder to rise from the gutter. Instead, challenge them with your higher standards. Don’t give in so easily to theirs! One of you is going to get what you want. So do either of you really want to destroy what you could have?

NOT ALL SOULMATES ARE MEANT TO LAST

Soulmates don’t always get to stay together forever. Some can be wonderful long-term relationships. But those soulmates rose to the soulmate challenge and raised their relationship standards. They did not lower them, at least not permanently. If you lower your standards, you may have a long-term relationship. But it will be full of chaos, drama and dysfunction. This can make many of them wish a soulmate had never entered their lives.

Before you let fear be your guide think things through. And using your head, not your heart. Would you let anyone else get away with this? Do you really think it is a bad thing to say what is on your mind and tell your soulmate they need to give you the attention you deserve? Is there anything really wrong with expressing how their lack of attention has made you feel? Do you think you have a right to tell them enough is enough and it is time for a change? Isn’t that what you should be able to do in a healthy relationship?

In a healthy soulmate relationship you’ll both make mistakes. But you can work through them, and resolve them. Don’t focus on the competition, because that won’t fix anything. It’s not the competition that is the problem. And it must be fixed from within the relationship. Your soulmate is choosing to put their attention elsewhere, and it is up to you to show them they are making the wrong choice.