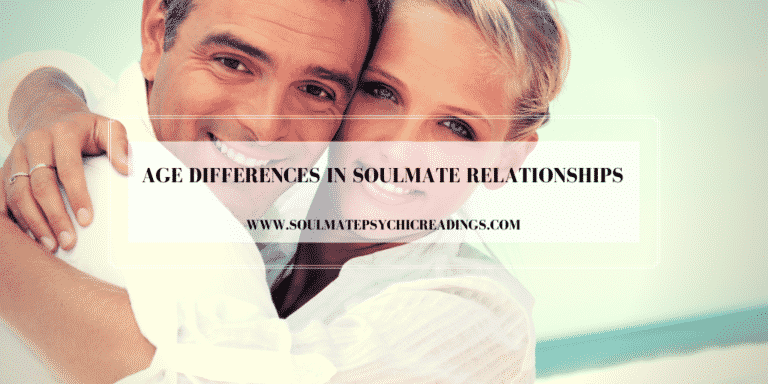 Age differences in soulmate relationships are quite common. Many people are surprised when they learn their soulmate is either much older or younger than they are.

Previously they were only attracted to people their own age. Then out of the blue they realize they share a soulmate connection with someone much older, or younger, them.

These relationships have their own challenges,. And when you add the soulmate connection it can bring even more difficulties. But that does not mean you shouldn’t be open to a soulmate relationship where there are age differences.

WHO CARES WHAT SOCIETY SAYS

Society still smirks and looks down upon relationships where there are significant age differences between men and women. And especially so when the woman is considerably older than the man.

Many of our clients worry about the age difference between themselves and their soulmate. If you and your soulmate don’t mind, who cares what anyone else thinks? If it works for the two of you, why listen to other people’s opinions?

You’re both adults and don’t need everyone’s approval. It would be nice if friends and family were supportive, but you don’t need their support to be a happy soulmate couple do you? As long as you do not let their lack of support hurt your relationship, they cannot affect it.

Some friends and family may mean well. They know the statistics for relationships and are just expressing concern. Others may want to run your life. Or they believe they know what’s right for you more than you do yourself.

DOES THE AGE DIFFERENCE BOTHER YOU?

You know how you feel for your soulmate. They don’t. Have they even experienced the special connection of  a soulmate relationship? People may see relationships with age differences as risky. Aren’t all relationships a risk to some degree? If you are going to take any relationship risk, wouldn’t you take it for a soulmate, regardless of the numbers on your driver’s license?

One of the challenges relationships is having a family. One partner may feel they’re too old for children or already have children. The same could be said for couples with no age difference. It may be more common in large age gap relationships, but it is not exclusive to them. It can be an issue in any relationship.

Another challenge in relationships with an age gap is being labeled a gold digger or having one’s intentions questioned. Many people believe the only reason a couple would be together with such an age difference would be money and lifestyle.

As long as the two of you know the truth, you don’t have to constantly prove yourself to others. Don’t let the differences in age between you and your soulmate concern you. The universe put the two of you together for a reason. Remain more focused on your connection, because, after all, age is just a number.

Have you ever been in a soulmate relationship with someone older or younger? We would love to hear your experiences!