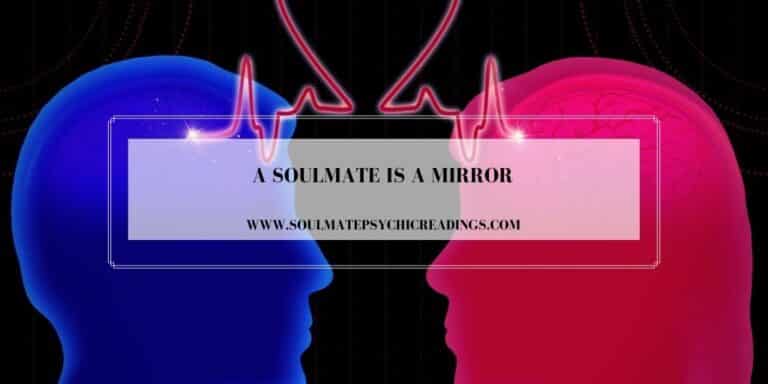 When you’re in a soulmate relationship you will mirror each other. Soulmates mirror one another to allow each individual to see their true selves.

Only when soulmates see their true selves can they evolve to be a better version of who they truly are. This allows them to become their truest and highest self. Soulmate mirroring forces you to take a long hard look at who you really are, warts and all.

WHAT DO YOU REFLECT?

Do you have any insecurities you have been trying to keep at bay? If so, you can expect your soulmate to bring them to the surface. This occurs so you can finally deal with them and get rid of them once and for all. Actually any unresolved issues, especially when it comes to relationships, can be renounced as well. Getting rid of them will evolve you to a better person of yourself.

There are other forms of the soulmate mirror where we find in a soulmate someone who shares the same tastes in music, art, food choices and even lifestyle. Soulmates discover their life paths have been a similar journey, sharing many synchronicities although they were living separate lives. For example, your grandmothers were born in the same little town in a foreign country. Such striking parallels are validation from the Universe of the soulmate connection.

It’s truly a joyous feeling to be with someone who has great compatibility with you on so many levels. You both feel you have finally met your match, the other half of yourself. And many times  feel you share a brain. Everything seems to be moving along perfectly. You know this relationship is meant to be.

THE DARK SIDE OF THE REFLECTION

Very often the mirror can have a dark side when we must face issues within our psyches. Especially if we don’t want to work on them. This is actually the point where all hell will break lose, and very often does. Problems develop within the relationship especially when one of you doesn’t want to evolve. But this is why the Universe brought you together: to work on yourselves to become better versions of you.

For example, let’s say Tom and Miranda are soulmates. Tom starts sabotaging the relationship because of his insecurities from prior relationships.  He tests Miranda to see if she will leave him, because he’s afraid she will. So he breaks dates, acts weird and aloof some times, won’t talk about his feelings, or tries to deny them. Now what Miranda should see in the mirror is Tom’s insecurity and the need for him to fix it.

Because soulmates mirror one another it’s easy to get caught up in what they are reflecting. What needs to be done at times like this is to see what they are projecting, then go inward. What has their negative projection brought to your surface?

That is what you must deal with. Don’t mirror their negativity back to them, it will only grow, and how can that help? Mirroring, even the negative side of it, can be a great thing for soulmates if they only learn the lessons brought to them and make the changes necessary to make themselves better people.

3 thoughts on “A Soulmate is a Mirror”