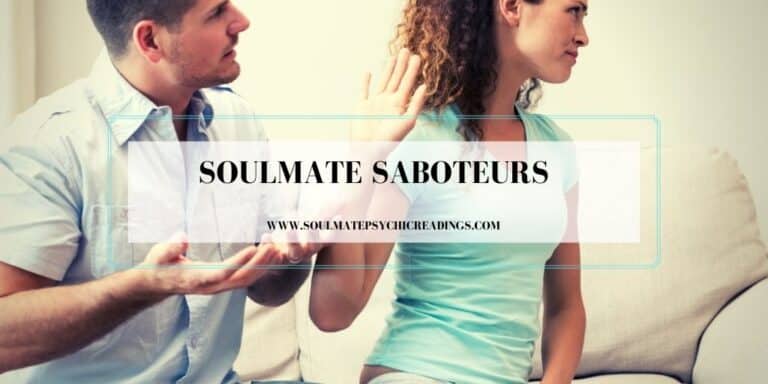 Soulmate saboteurs always know what they are doing. But often they do not really understand why. Until they get to the root of their issues, they will continue to sabotage their soulmate relationship.

Many people ask us during psychic readings if their soulmate is intentionally sabotaging their relationship. And they want to know if they’re doing it deliberately or have no clue what they are really doing. First of all, soulmate saboteurs know they’re causing a problem they don’t have to. So in that affect, they know they’re sabotaging the relationship. But why they “think” they’re doing it, is actually not correct.

In most cases, when soulmates first meet the intensity is intoxicating. They don’t think, they just feel. And it feels GREAT. So they surrender to the connection and everything that comes with it. An exhilarated energy flows between them. And they stay up late into the night to communicate and develop feelings faster than they normally would.

SLOW DOWN, YOU MOVE TOO FAST

At some point, because they move too fast, things must slow down a bit. They’re so focused on their new-found love they neglect work and other aspects of their lives. They are unsure how to make the adjustment.. And most don’t do it smoothly. Some misread the situation and think they have to keep the soulmate relationship at that pace. Or let it go. They don’t realize there’s a middle ground. So they tap on the brakes to slow the pace rather than leave the relationship.

They know what they’re doing. But the thing is, they really don’t understand why. If they can understand the intense emotion is okay, and it’s okay to slow the pace down, they wouldn’t have to feel they must bail out entirely. But they may also feel uncomfortable caring about someone so quickly. How can this be realistic? So therefore it can’t be “real”. So they end the relationship.

When we look at ourselves, we don’t always look deeply. Many people are afraid to do that. Because they won’t like what they see. If soulmate saboteurs only look at the surface level, they’re missing the real reason why they’re sabotaging the relationship. It’s on the deeper levels where soulmates discover lessons they have to learn.

Many people contact us asking what lessons they or their soulmate must learn. Is it really that hard to see? Nope, it’s more than likely obvious to everyone around you. And it should be to you too. Stop scratching at the surface for answers, because that’s not where they are.

For instance, let’s say you have a problem because your soulmate’s ex keeps calling. On the surface, the ex calling is the problem. But go deeper with it. How is your soulmate handling these calls or texts? And how are you handling the calls from their ex? That’s where the problem really is.

Now go deeper again. So your soulmate hasn’t blocked their calls. Is that the problem? Or is it deeper? Have they cheated before with this ex and not yet regained your trust? Let’s say that’s the case. Just stopping the ex from calling won’t fix the problem. It won’t get your trust back. So the real problem is about the trust between you, not the ex calling. Five hundred exes could call your soulmate and it wouldn’t matter if you completely trust them.

So to sum it all up, because many people stay stuck looking at the surface they may not be aware of exactly why they are soulmate saboteurs. They need to go deeper into themselves.