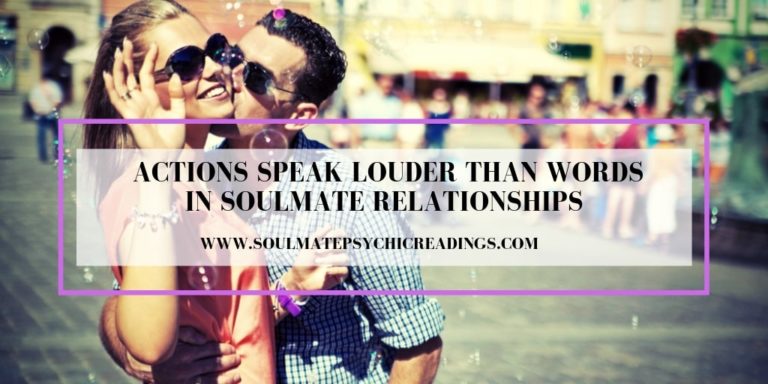 Actions speak louder than words in soulmate relationships. This is actually a common lesson most soulmates must learn to keep the relationship on track. When actions don’t support spoken words, the words are meaningless. The same holds true for your soulmate. If they are telling you how much you mean to them, but their actions don’t support their words, then their words are meaningless.

If either of you continually apologize for your mistakes, but the mistakes are constantly repeated, your apology was just lip service. When you or your soulmate promise to change but do the same thing over and over, why should you believe each other? Actions and words should back each other up. Not be complete opposites.

ACTIONS ARE MORE POWERFUL THAN WORDS

It’s easy to lie with words, but it is much harder to lie with your actions. This is why actions speak louder than words in any relationship. So, if words and actions conflict, believe the actions instead of the words.

So what should you do? Well, talking sure isn’t going help, especially if your actions don’t support your words. Did you threaten to end the relationship but then change your mind? Do you give them an ultimatum and follow through with it?  If you want their words to match their actions, yours must also match.

Women have a desire to talk things out and express themselves. Nothing is wrong with that. But after a while they have heard it all before. Males are more about action. How can they take you seriously if you just keep talking about it but are not acting on it? See the difference? (This is a generalization, not meant to speak for all females and all males).

If you want someone to take you seriously, they need to see it. Not hear it, but see it. it packs a bigger punch and is much more believable. Stop talking and focus on your actions with your soulmate. Once the actions are on the right path, the words will easily sync with them. And then the relationship will move forward.

5 thoughts on “Actions Speak Louder than Words in Soulmate Relationships”